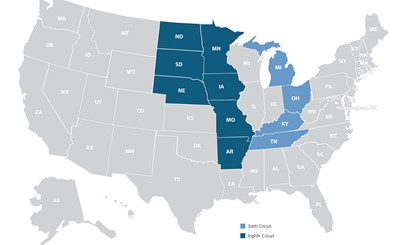 On October 10, 2017, the Supreme Court denied a petition to hear a child welfare case about kinship placements decided in January 2017 in the Sixth Circuit Court of Appeals. The Circuit Court ruled on January 27, 2017, that kinship foster families are entitled to the same foster care maintenance payments as unrelated foster parents. D.O., et al. v. Glisson, No. 16-5461 (6th Cir. Jan. 27, 2017). The court’s ruling primarily rests on provisions of the Civil Rights Act of 1871 (42 U.S.C. § 1983), the Adoption and Child Welfare Act of 1980 (also known as the Child Welfare Act, CWA or Title IV-E of the Social Security Act codified in 42 U.S.C. § 672), and Supreme Court cases that have collectively interpreted these two statutes to confer a private right to foster care maintenance payments that is enforceable by foster parents regardless of whether the foster parents are related or unrelated to the child(ren).

This case originated in Kentucky with two children that were placed with their great aunt following a finding of neglect. The state conducted a standard home evaluation and criminal background check on the aunt prior to the court ordered placement. Based on its review of federal statutes and Supreme Court decisions, the Sixth Circuit’s ruling holds that the enforceable right to foster care maintenance payments also applies to temporary kinship placements (specifically, foster care kinship placements). Therefore, if an agency places a child in an out-of-home setting with a licensed foster home or approved relative home and does a home evaluation and criminal background check, then the home will have to be paid irrespective of the foster parent’s relative status to the child(ren).

In short, this case treats relative and non-relative foster care placements the same by requiring that foster care maintenance payments cover the costs enumerated in Title IV-E of the Social Security Act for all licensed and/or approved placements, including temporary kinship placements. By denying Kentucky’s petition, the Supreme Court has left this issue unsettled nationally.

For example, the Care v. Kincade case from 2013 in the neighboring Eighth Circuit (see map) came to conflicting conclusions by holding that foster care maintenance payments were not federally mandated. Unless the Supreme Court agrees to hear a similar case from another jurisdiction, the Sixth Circuit states of Kentucky, Michigan, Ohio, and Tennessee must now treat approved relative foster placements the same as non-relative placements by awarding foster care maintenance payments on behalf of children in state custody.

This will require a great deal of changes with state laws and regulations—a considerable shift in funding for these four Midwest states. The Kentucky Cabinet for Health and Family Services is currently assessing how to apply the court decision. Kentucky legislators are also reviewing a bill (SB 29) to restore its Kinship Care program that ended in 2013. Kinship Care would require Kentucky to provide additional support and services to kinship caregivers and children. In the meantime, there are 350 children in eligible kinship placements waiting to receive foster care maintenance payments while the Cabinet determines payment policies that will comply with the final decision from the Sixth Circuit Court of Appeals.

PCG will continue to monitor new developments and will provide updates as additional information becomes available.