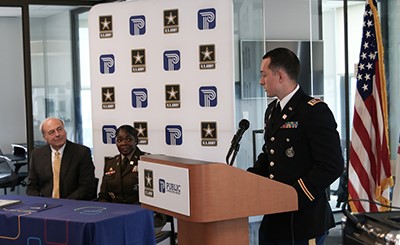 Joins the ranks of more than 1,100 corporations, companies, and public sector agencies who help connect soldiers to post-military career opportunities

This week, Public Consulting Group (PCG) announced that it is joining forces with the United States Army through the Partnership for Your Success (PaYS) Program. This strategic partnership between the U.S. Army and a cross section of corporations, companies, and public sector agencies, helps to connect enlisting soldiers and Reserve Officers’ Training Corps (ROTC) cadets to post-military career opportunities. PaYS guarantees soldiers and cadets job interviews with up to five PaYS partner organizations—of more than 1,100 across the country—as they transition to civilian life. PCG Founder, President, and CEO Bill Mosakowski and Lieutenant Colonel Natasha Clarke, commander of the New England Recruiting Battalion, jointly signed a memorandum of agreement solidifying the partnership during a small reception at the firm’s Boston headquarters.

Addressing the group, Lt. Col. Clarke said, “The PaYS program allows military veterans to interview for positions similar to those in their own career field and provides a welcome home for our military service men and women. There is security in knowing that our veterans have opportunities waiting for them; opportunities for them to take their skills from ‘Boots to Suits.’

Lt. Col. Clarke continued, “The United States Army invests time and resources to train our nation’s service members, which enables our veterans to bring this training and those learned job skills with them into the civilian market.”

Echoing Clarke’s enthusiasm for the burgeoning partnership, Mosakowski said, “It is an honor to be recognized as a PaYS partner organization and to have the opportunity to empower our veterans and service members in their civilian career pursuits. The PaYS Program is a win-win for soldiers, their families, and employers such as PCG. The program offers those from the U.S. Army a pipeline for guaranteed interviews and potential employment in a fast-growing company, which works in every state of our nation.”

Mosakowski continued, “With the execution of today’s agreement, PCG gains access to a talent pipeline of skilled and passionate candidates who are dedicated to public service. Our firm is proud to be a member of the PaYS Program and to offer an employment platform where veterans and service members can leverage their leadership skills, training, and Army experience to continue their service to the communities in which they live.”

Sgt. Reynolds said, “PCG is committed to creating and sustaining strong pipelines to recruit and retain military veterans and those who continue to serve, including active-duty service members, reservists, members of the National Guard, and military spouses. In fact, members of our internal veteran mentor program, PCG’s Military Networking Group (or ‘MNG’ as we often refer to it), helped put PaYS on the radar of our senior leaders. We’re excited to continue growing our veteran employee base as a PaYS partner.”