With the onset of COVID-19 and the ongoing Public Health Emergency (PHE) designation, states have been forbidden from disenrolling ineligible Medicaid clients and limited in their ability to verify self-attestations on new Medicaid applications in exchange for enhanced federal funding. As a result, nearly every state’s Medicaid population has grown considerably since the onset of the pandemic and nearly every Medicaid client covered by states has not been subject to a complete eligibility redetermination in at least 12 months.

This situation presents a number of unprecedented challenges for states, the most significant of which are as follows:

Therefore, when the PHE ends – currently scheduled for April 2021 – states will have to either (1) rush to redetermine the eligibility of nearly their entire Medicaid population or (2) simply auto-renew all clients for another year and, by doing so, absorb the cost of continuing to pay for egregiously ineligible clients while you catch up on eligibility redeterminations (without the benefit of the enhanced federal match).

Solution: Public Consulting Group (PCG) is offering our agency clients a no cost, risk-free, automated ex parte eligibility redetermination solution, in accordance with 42 CFR § 435.916(a)(2) and facilitated through PCG’s Instant Eligibility Verification System (IEVS). Proven in three states – including a top 3 Medicaid program – PCG’s IEVS uses dozens of third-party data sources, combined with eligibility policy-based analytics, to allow us to instantly perform an ex parte redetermination of the eligibility of a state’s entire Medicaid population in the days following the conclusion of the PHE. This will allow states to:

How it Works: PCG’s IEVS is completely configurable to reflect each client’s specific eligibility policy, allowing us to match third-party data against policy-based rules to predict eligibility and flag fraud and ineligibility, as follows:

Financial Impact: As illustrated below, in a state with 1 million Medicaid clients who cost the state an average of $500 per month, the state can save nearly $140 million by using PCG’s IEVS to automatically redetermine eligibility on day one following the PHE, rather than waiting until clients’ next scheduled renewal date. 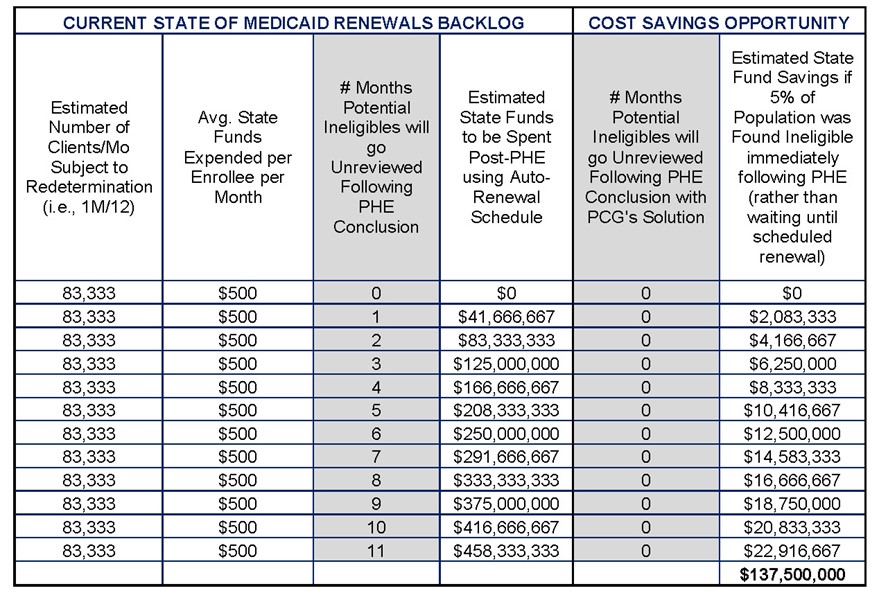 Pricing: PCG’s proposed automated Medicaid eligibility redetermination service is available to our agency customers at no cost, through either enhanced Coronavirus Relief Funds (authorized through the CARES Act) and/or by hiring PCG on a contingency fee basis, with PCG’s only fee being a nominal portion of cost savings which can be verified based on each terminated client’s continued disenrolled status in the months following their termination.